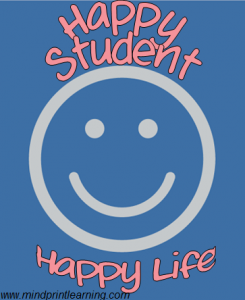 When parents are asked what they desire most for their children’s future, not surprisingly the overwhelming response includes the word happiness. And yet, grown-ups might be the biggest roadblock to kids finding happiness.

Regardless of what we tell children, they primarily learn by example. Our children model what they see, not what they’re told. And that implies that we might be inadvertently instilling behaviors and beliefs that will make their long-term happiness that much more elusive. But we can change. Here’s how.

What Parents Can Stop Saying and Start Doing

Stop Saying “You need to work hard now if you want to be successful and happy later.” Encouraging students to singularly pursue success under the mistaken belief that success will lead to happiness is a fallacy. As explained in Harvard Business Review, success is always a moving target, so the happiness that results from success is always fleeting. In contrast, happiness that comes from within is long-lasting.

Instead, start discovering what motivates your child, whether it’s a passion for a certain subject or a long-term career interest. Use your child’s intrinsic desires to create meaning and develop the will to persevere. Over time that desire is far more likely to result in good grades and long-term achievement than any external rewards or warnings that “without good grades you’ll never get a good job.”

Stop Saying “You need to have long-term goals and ambition…” Overemphasizing goals — and especially those that are based on measurable outcomes — often leads to reduced intrinsic motivation, stress, and unethical behavior. In addition, “becoming a slave to the achievement of a specific goal creates a volatile and fragile sense of self.”

Instead, start helping your child set achievable, shorter-term goals. Setting hopes on a single college or an athletic scholarship is likely to backfire. Instead, set goals based on personal improvement. If your child averaged 2 points per game last season, aim for 4 points this season. If your child had a B- in science last semester, shoot for a B+ this year. Almost no one makes the leap from average performer to overnight sensation, but everyone is capable of making good progress with the right effort and support. Goals should be specific and achievable yet challenging.

Stop Saying: “You are the most special, the most wonderful, the greatest…” Parents who believe their kids are better and more special than other kids usually pass that point of view on to their children. There is a direct correlation between parent over-estimation of a child’s worth and children developing attributes of narcissism, i.e. superiority, entitlement, and self-centeredness. Once ingrained, these character traits can be difficult to change. Most narcissists lack the capacity to give significant, authentic love and empathy and rarely experience any sustained happiness.

Instead, start praising good effort, intent and behavior. Of course you should believe in your child. Just remember that while your child is special, that does not make him any more deserving than any other child unless his good effort, behavior and performance earns him the opportunity.

Stop saying: “What matters most is how you treat others…” And then valuing your child’s achievement over behaviors. While 96% of parents say they want to raise ethical, caring children, 80% of middle and high school students believe their parents and teachers are far more concerned about their achievement than their behavior. Kids sense what adults really feel, regardless of what they say.

The best way to set your kids up for happiness later in life is to model the behaviors and character traits that are consistently proven to bring happiness. And to do that with sincerity. Of course, we believe the best way to develop happiness is, quite simply, HAVE FUN WITH YOUR KIDS.

Big Goals Can Backfire. Olympians Show Us What to Focus on Instead (New York Magazine)

Why Kids Care More About Achievement Than Helping Others (The Atlantic)

In case you missed:

A Parent’s Guide to the First Six Weeks of School

How to Crush School

Back to School Essential Reads

Schools Have No Choice But to Personalize Learning